She is enlightened spontaneity in female form,
A supremely blissful divine yogini.
She is the mansion of enlightened awareness.
Possessor of the five Buddha-Wisdoms…
She is pure, universal awareness,
The sovereign of the mandala.
She is Nairatmya Yogini,
The essence of ultimate reality.

She is subtle and spacious and vast as the sky. Her body is blue, the color of infinite space, reflecting the limitless expanse of her awareness. Separation is an illusion, in truth we are connected with all that exists in a vast web of communion. Swan Devi (Nairatmya) embodies this realization. She is the Lady of Emptiness. She Who has Realized Selflessness. Like the element of space, she flows through the universe without impediment, for she has transcended ego-centered existence. 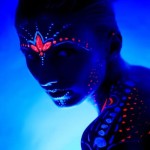 Her eyes blaze with the wisdom of one who understands the mysteries and depths of life. She raises her curved knife skyward, poised to sever negative mindstates wherever they arise. In her skull bowl, she pulverizes illusions and returns them to their original state – a mere play of light, a rainbow of energy, shimmering in empty space. In a state of perpetual dance, she celebrates the bliss that pulses at the heart of reality. Her gleaming bone ornaments sway, glistening like cascading beads of light, illuminating the heavenly expanse of her body with shooting stars and swirling galaxies. To behold her is to long to join in her cosmic, eternal dance. (M.Shaw)

She is deep blue in color, the indigo of midnight. She is draped with a skull necklace, bone ornaments, and a tiger skin skirt. Bearing a flaying knife, skull bowl, and tantric staff, she dances on an upward facing corpse on a moon disc. She has a fierce persona with furrowed brows, lolling eyes, bared incisors, lashing tongue, and upswept tawny hair. She transforms anger into mirrorlike clarity. The ferocity often attributed to female Buddhas also evinces the intensity of one who has faced and conquered all obstacles to enlightenment.

The flaying knife is for cutting off mental and emotional defilement’s, and the skull bowl is the realization of emptiness, which is beyond being and nonbeing. From her skull cup she drinks the blood of the four mara-demons, symbolizing the primary forms of attachment to self.

As a diamond sky dakini, she is identified with the mystical heat that is kindled in the navel chakra through inner yogic processes. She is known as the Burning One and described as ‘dwelling in the navel, source of supreme bliss, glorious, adorned with flames by virtue of her fiery heat.’ This inner yogic fire consumes delusion by rising upward along the spine, purifying the chakras of karmic residues of thought and emotion. Upon reaching the crown chakra, the heat causes the nectar of bliss in the crown of the head to melt and flow downward, generating increasing rapture and bliss, culminating in the supreme state of spontaneous joy when the nectar reaches and saturates the navel chakra.

This internal fire is a yogic version of the apocalyptic conflagration that destroys the world at the end of every cosmic cycle so that it may begin anew. In both cases fire is the consuming element, reducing all things to an undifferentiated state, returning them to their essence. This essence – the one thing remaining at worlds end, the irreducible quality of the world that is realized upon enlightenment is bliss – ‘Bliss is the single self-existent, perfect and eternal.’ She is bliss supreme.

“The fire from heaven (bible) that will destroy so many people is the fire within your own body. It is the kundalini rising. If trouble began in a big way, the safety valve of the race soul opens, pouring a certain symbol of pressure into the soul of man, quickening him. As each man is raised up, his pressure is spread to all things and anyone who has not cultivated his thought processes and interiors of this body and does not Love his fellow man will surely die – for the great fire from heaven will burn him up if he is not prepared to meet his God.” L. Shine

Swan Devi translates into ‘purest form of knowledge (swan) from the goddess (devi)’.