In the beginning the Sun, Surya, appeared in the heavens. Sages offered soma so that the world might be created. The sun then created the three worlds. Shodashi was shakti through whom created them. Having created the worlds by empowering the sun, Shodashi took appropriate form to direct the triple world. In this form she became known as Bhudevi – mistress of the world. She is unmanifest until the world is created – therefore she is associated with the visible world. In simplest terms, the triple worlds are lokas – Earth, Atmosphere, and Heaven.

More than any of the other Mahavidyas, Bhudevi is identified with the earth, the creation in general, and the underlying energy that brings it to be and pervades it. This includes the basic physical elements found in nature. Her name itself translates into Mistress of the World, She Who’s Form is All, She Who Makes All the Worlds, She Who Dwells in the Five Basic Elements; Fire, Earth, Water, Metal, and Wood. The universe rests on Bhudevi, arises from her, melts away into her, and while it exists, is identified with her.

The world is said to emerge from her as a web emerges from a spider or as sparks emerge from fire.

Prior to the formation of the Mahavidya grouping, earlier accounts of Bhudevi (Bhuvanesvari) attributed to Sankara speaks of Prapancesvari the Mistress of the five-fold world, saying she has the luster of a thousand rising suns, source of all and that into which all dissolves at the end of the cosmic cycle. This aspect of Bhudevi’s character is often expressed in terms of her overseeing the three cosmic functions of creation, maintenance, and destruction. She is the cosmic queen, she who pervades the creation and from who it emerges and into whom it eventually dissolves. 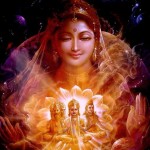 She is the mother of Brahma, Vishnu, and Shiva and the cause of their forms and functions, that is the cause of creation, maintenance, and destruction. Siva says in her praise: ‘whatever is knowable, is she herself’. This movable, immovable world during the ‘great cosmic dissolution’ goes to rest in her. She is the source of the vitality that pervades the physical creation as well as being identical with the creation itself.

Bhudevi not only nourishes the creation, she protects it. She does this by assuming various forms to combat demonic forces and preserve and restore cosmic order. A demon slaying protector of the cosmos.

In her role as creator and pervader of the cosmos Bhudevi is often identified with Saraswati, particularly as the goddess of speech, mistress of speech, and is identified with ultimate reality in the form of sound, the essence of sound. In terms of sound she is the Gayatri Mantra, the most sacred verses of the vedas. She is also said to be kundalini sakti and as such is the energizing element of the human organism that is awakened in sadhana.

She is said to sleep in the root chakra and as kundalini to rise up through the chakras, breaking the knots within them and liberating the worshiper. Bhudevi is complete and self contained.

Her yantra is identical to that of Shodashi (Tripura Sundari) and is known as the sri yantra. This symbol combines basic shapes and patterns and depicts the essence of a deity and her powers. The sri yantra symbol is a potent multidimensional representation of the goddess. In overall design the yantra is intended to represent the emergence of the cosmos from the center to the outer edges.

Descriptions of Bhudevi’s beauty are legendary. She has a golden complexion and a beautiful face, framed with flowing hair the color of black bees. Her eyes are broad, her lips full and red, her nose delicate. Her breasts are high and firm, her waist is thin, and her thighs, buttocks, and navel are lovely. Her beautiful throat is decorated with ornaments, and her arms are made for embracing. Shiva is said to produce a third eye to view her more thoroughly. By other accounts she is said to be a beautiful young girl, to have a smiling face, and to have an attractive sexual organ. She is said to be the triangle itself – the yoni. 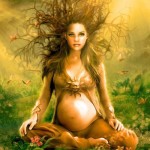 The beauty and attractiveness of Bhudevi might be understood as an affirmation of the physical world. In shakti tantric thought and practice, there is a strong emphasis on world affirmation, which insists that underlying all of reality is the power, the Shakti, of ultimate reality. The physical world, the rhythms of creation, maintenance, and destruction, even self infatuation and the hankerings and sufferings of the human condition, are all affirmed to be Bhudevi’s play, her exhilarating joyous sport.

Bhudevi never ceases to attend to the world. She nourishes the world that she oversees and protects. She is the food itself which all creatures depend. Her smiling face reveals her gracious attitude toward the world and all those creatures who depend on her for sustenance.

The goad and noose held by Bhudevi suggest control. The goad means that she controls evil forces or inner hindrances, such as anger, lust, and any obsession that interferes with spiritual development. The noose symbolizes the different bodily sheaths that hide, and therefore bind, the spiritual essence of a person. The goddess therefore helps discipline the devotee with her goad, while at the same time she is the power that masks one’s true identity. She is both liberating knowledge and illusion. She both gives liberation and withholds it. She teaches proper moral behavior and uses it to guide devotees.

The red lotus and jeweled drinking bowl full of jewels that she holds are symbols of growth and wealth. The jewels represent abundance and riches, while the lotus represents the vigor inherent in the living world. She also wears the crescent moon on her forehead which represents the power of replenishment. Bhudevi is the inner essence of the created world, which empowers it to continue to reproduce itself endlessly with renewed vitality.

Like many deities, and spiritual masters, Bhudevi sits on a lotus. This suggests a commanding position and also the seat from which creation sometimes takes place. The lotus seat symbolizes spiritual mastery and triumph as well: perfection that is grounded in the world like roots of a lotus, and yet transcends that world. It is a symbol of authority, purity, and transcendence. Bhudevi – she who wanders in the physical world, and she who wanders in the void. She is the world but also transcends it, as its source and as its container at dissolution.