She is the quintessence of sweet eros,
Glorious with the beauty of infinite fiery brilliance,
With full breasts and buttocks,
Terrible with fangs flashing in the light
Shooting from her three rolling red eyes
Her broad tongue lashes its curling tip
She is as bright as all fires…

Kurukulla is a ‘Female Tathagata’, a primordial mother, a female Buddha. As such, she also figures as a meditational deity in the highest and most esoteric division of Tantric practices, the Highest Yoga Tantra class, whose goal is the attainment of Buddhahood in the present lifetime.

Because Kurukulla is a fully enlightened being, there is no limit to her mastery. She is also known as the Overpowering Goddess, Subjugator of the Three Realms, expressing her dominion over all that is below, on, and above the earth. At the most worldly end she holds sway over humans, spirit beings, gods, rulers, countries, food, clothing, wealth, and fame. She is often invoked to remove human and demonic obstacles to new ventures by traders, students, and hopeful lovers seeking success.

Kurukulla is a goddess with unlimited powers of enchantment. Her voluptuous body is bright, glowing red, the hue of passion and amorous desire. Glistening with ruby radiance, mistress of the art of seduction, Kurukulla displays the tools of her magical craft: the flowered bow and arrow with which she pierces the hearts of those she would enchant, the noose with which she binds them, and the elephant goad with which she hooks and draws them into her sphere of liberation.

Kurukulla’s weapon is adorned with red lotus blossoms that send forth swarms of fierce red bees. The targets of her magic do not feel suffering. They are intoxicated by the fragrance of the lotuses, mesmerized by the buzzing of the bees,  and bewildered by crimson clouds of rapture. Thus enraptured, they are susceptible to Kurukulla’s transcendent sorcery. A reluctant object of desire can become an ardent lover; a wealthy person can become a patron; an enemy can become a friend. Kurukulla’s magic has the power to soften the hardest heart, dissolve disharmony, and bestow the highest bliss.

The Magical Function of Enchantment

Kurukulla appears to have become popular originally, and she remains so even among the Tibetans today, because of her association with the magical function of enchantment or the bewitching of people in order to bring them under one’s power. More than any other figure in the Buddhist pantheon, Kurukulla becomes the Buddhist goddess of love and sex, corresponding to the Western goddesses Aphrodite and Venus. She is depicted as a voluptuous and seductive nude sixteen year old girl. At her crown is the syllable OM, at her throat is the syllable AH, and at her heart is the syllable HUM. 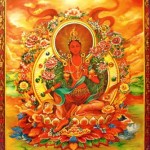 The ornaments of human bone she wears signify the five perfections, whereas she herself embodies the sixth perfection, that of wisdom. She wears a necklace of fifty freshly severed human heads dripping blood because she vanquishes the fifty negative emotions. She is dancing because she is active and energetic, her compassionate activity manifesting in both Samsara and Nirvana. She dances, treading upon a male human corpse because she enchants and subjugates the demon of ego. She stands upon a red sun disc because her nature is hot and inflamed with passion and upon a red lotus blossom because she is a pure vision of enlightened awareness. The lotus is associated with female sexuality and symbolizes, among other things, the female genitalia.

The secret of Kurukullas power is that she wields the unconquerable, irresistible force of love. Her heart is a reservoir of this emotion in its most refined form. Her drawn arrow, poised in front of her heart, becomes saturated with her beauteous heart essence. To be pierced by her arrow is to be penetrated by her transcendent love and undergo a profound change of heart. Herein lies the power of the goddess to subdue, impassion, and incite to higher love and awareness.

There would appear to be a potential misuse of Kurukullas rites to harm others, but those who would invoke her in ritual and meditation cannot call on her services for selfish ends. Kurukulla is motivated by wisdom and compassion; her divine beauty reflects her transcendent purity. She will never grant a vision of herself or perform her magic for those who seek only to benefit themselves or inflict suffering on others. Kurukulla, like every Buddha, acts solely for the welfare, happiness, and liberation of all sentient beings.