Tara has many forms. Golden Prassana Tara is Terrible to Behold, blazing like the sun, with a necklace of bloody heads and sixteen arms holding an array of weapons and Tantric attributes. She “emancipates the universe” and ‘destroys the veils of ignorance.’ She Who is Fearsome With Upward Flaming Hair. Tara the War Goddess. Who is Peaceful by Day and Wrathful by Night, the daytime form is the ever popular Green Tara. The nocturnal manifestation is white and corpulent, aggressive in appearance, garbed in a leopard skin vest and snake necklace. 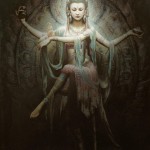 Tara occupies a a central place in Tibetan Buddhism and to a great extent plays the role of a Tibetan national deity. In her Buddhist context, she is almost always a benevolent, compassionate, gentle, playful young woman who indulges her devotees and never lets them come to harm.

In her Hindu context, on the other hand, particularly as one of the Mahavidyas, Tara is almost always fierce, often horrible to behold, and potentially dangerous. Although Tara also has fierce aspects in Buddhism and benign ones in Hinduism, she generally manifests gentle features in the former and fierce ones in the latter. Historically it is likely that the Hindu Mahavidya Tara developed from the Buddhist bodhisattva Tara and that the Hindu preference was for her fierce manifestations, i.e. her Wrathful Green Tara, another facet of a complex and creative gallery of manifestations Tara assumes. In fact, the shakti cluster diagram (JLL’s Design) identifies this Wrathful Green Tara aspect as primary, however I am taking liberty to introduce her golden aspect with equal measure, in playful pleasure.

Tara’s importance in Buddhism preceded her inclusion into the Mahavidya Hindu tradition. Tara’s essential nature in Tibetan Buddhism is that of a compassionate savior who rescues her devotees from peril. An interesting aspect of early Tibetan legends is that they associate Tara with the origins of the Tibetan people in a special way. She is in a legendary sense their queen and mother. The Buddhist tradition celebrates motherhood in many ways and through a range of female divinities, but nowhere is motherhood more complete or exalted than in Tara, the ultimate embodiment of mother love.

Despite Tara’s many forms and functions found in early texts, i.e. Homages to the Twenty One Tara’s, it seems clear the roots of her extraordinary power and appeal are that of a Savioress, as a being who specializes in dramatic appearances when her devotees call upon her in dire circumstances. She is often said to rescue her devotees from such desperate predicaments as being lost in an impenetrable forest, foundering in a storm at sea, being under threat of imminent execution, or being trapped and bound in prison. In many folk stories Tara appears at the request of her devotees to snatch them  from the jaws of death. Tara’s compassion for suffering beings, then, is revealed primarily in her role as cheater of death. In this sense her chief blessing to her devotees is a long life.

The Fierce Tara of Hinduism

Historically, it is likely that the Hindu Mahavidya Tara developed from Buddhist bodhisattva Tara and that the Hindu preference was for her fierce manifestations. Indeed she is more like Kali in appearance than any of the other Mahavidyas.

Nearly every description of Tara in Hindu sources stresses her fierce, often horrifying appearances and reminds us of the Fierce One that is Bhairavi. One Hindu mantra describes her thus:

“I meditate upon the divine Mother of the three worlds, who is sitting on a white lotus situated in the center of the waters enveloping the entire universe. In her left hand she holds a knife and a skull, and in her right hands, a sword and a blue lotus. Her complexion is blue, and she is bedecked with ornaments. She is decorated with three beautiful serpents and has three red eyes. Her tongue is always moving, and her teeth and mouth appear terrible. She is seated on the heart of a corpse near a blazing funeral pyre. Thus should one meditate on Bhugavata Tara, who is the mistress of all three worlds.”

Tara’s description and character in Hindu texts emphasize two important and related features that are absent from the Buddhist Tara: 1) she is strongly associated with the goddess Kali, whom she closely resembles, and 2) she is often located in the cremation ground. Like Kali, in her Hindu context Tara enjoys blood. She Who Likes Blood, She Who is Smeared With Blood, She Who Enjoys Blood Sacrifice. Like Kali, her worship seems to play upon the power of the forbidden and the attempt to transmute forbidden objects or acts into spiritually transformative instruments. And like Kali, Tara’s fierce aspect may be interpreted in positive ways that conform to her role as the liberator.

Although Tara’s appearance and habits initially seem to be almost totally terrifying and fearsome, she has a gentler side. She is a savior who takes special care of her devotees, and in this respect she reflects the personality of the gentle Tara of Tibetan Buddhism. The Hindu Tara’s means of helping her devotees are more abrasive and frightening, but the end result – liberation – is similar. The Hindu Tara tends to shock her devotees into liberating knowledge, while the Tibetan Tara overwhelms them with compassion.