She dwells on a forest glade high on a mountainside. Her beauty reflects the lure of the forest. Her skin glistens with emerald light; the healing sap of trees flows in her veins; her limbs are robust and supple as saplings. She adorns herself with natures finery: feathers, flowers, fruit, and berries. She is necklaced by a white snake, crowned with flowers, and has small snakes as hair ribbons. She wields a small axe. She brandishes a bow and arrow. She is a huntress and her aim is true. She wears a skirt made of leaves that sways around her hips as she dances in her primeval bower.

Thus arrayed in tribal splendor, she wanders in a state of joyous, primal rapture, alive to the colors, fragrances, and textures of the forest. Her woodland home is a treasure trove of botanical riches and medicinal secrets. Tutored in the unwritten lore of the forest, she is mistress of the healing mysteries, a goddess with the power to cure the most drastic illnesses and epidemics. Vudasi (Parnasavari / Panacea) embodies the close relationship with nature that must be maintained if the healing arts are to flourish. Even when Vudasi is evoked in ritual, the environment created for her is not the standard jeweled mansion of a deity but a gem laden mountain dense with groves of magical trees and carpeted with flowers of every hue. Thus the goddess need not leave her verdant wildwood paradise to manifest at the ritual.

Vudasi personifies the magical healing properties of nature that can be tapped through dance, trance, and incantation. Because her curative powers are channeled through meditation, ritual, and mantra, the objects that she bears also serve a ritual purpose. Her implements also serve in the ritual capture and binding of diseases. Diseases are not only bodily conditions, but can be entities – invisible to the eye but none the less tangible – that can be banished or destroyed. When Vudasi is ritually invoked to perform this function, she uses her vajra-tipped noose to lasso the disease demons. She clasps the noose with a threatening hand gesture, signaling the imminent entrapment of harmful spirits. After she has extracted the disease demons, she uses her axe to chop them, or her bow to pierce their hearts, rendering them impotent. 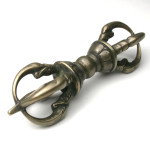 The ritual dimension of Vudasi is most directly indicated by the vajra (bronze scepter; translates: thunderbolt and diamond) she bears. The vajra symbolizes her indestructibility as well as her adamantine insight into the illusory nature of all phenomena. A healer, to be effective, must have the wisdom to recognize ultimate insubstantiality of a disease if she or he is to envision its absence and accomplish its removal. Moreover, in tantric ritual a vajra is flourished with sacred hand gestures to channel energy. Thus, the vajra conveys that the healer works with the patients energy. The physical symptoms are understood as a tangible manifestation of a negative energy embedded in the patient’s psyche or a disturbance of the patients energies due to toxic substances, harmful psychological forces, or malevolent supernatural agency. A healer must discern the nature of a disease as a blockage in the energy flow and intervene to restore a balanced, healthy pattern. The vajra, as a tool for directing energy, addresses this metaphysical level of healing work. The scepter strikes through the physical manifestation to the core of the problem. 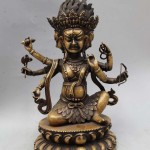 Vudasi is the picture of robust vitality. She is said to be youthful, vibrant, and muscular, with a plump firm body, a sign of good health reflecting her capacity to trample disease demons. Devotees of Vudasi can gain access to her healing powers in several ways. All of these techniques begin with a vivid mental image of the goddess. The meditator absorbs the image and then works with her divine healing energies in a state of unity with her. One method is to transmit colored light from the meditators body to the patient, or whole towns or areas that are threatened by contagious diseases or epidemics. The healing ray colors are frequencies and can be forest green, radiant red, marine blue, golden sun, soft white, or the violet purple ray of shakti.

Another method is to make amulets that are imbued with her presence by dharani recitation. Such an amulet is worn to protect the wearer against infectious diseases and other misfortunes. A healing practitioner may compound medicinal pellets from powdered herbs, foods, and gemstones according to her texts. Here the healer envisions her image dissolving into the pills, and further vivifies them with mantra recitations.

Although the process of healing associated with Vudasi involves physical substances and ritual acts, it is ultimately seen as a process of spiritual purification. The inner dimension of healing operates on the most subtle levels of a persons being, eliminating the underlying causes of illness by clearing blockages in the normal flow of energy and infusing the recipient’s spirit with sufficient radiance and resilience to prevent a recurrence of the disease.

There is an ancient Tibetan healing meditation that operates on this subtle level. The healer focuses on five energy centers in the yogic anatomy of his or her body. These five chakra centers are located at the crown of the head, throat, heart, naval, and root (pelvis). The healer creates a mental image of Parnasavari in each chakra: a white goddess at the crown, red at the throat, blue at the heart, yellow at the navel, and green at the pelvis. These small figures emit streams of light that the healer transmits to the corresponding bodily sites in the patient. The patient consciously absorbs the energy and visualizes it flooding the energy centers, removing energy blockages and regenerating the body at the etheric level.

A person who is sufficiently self-aware can prolong the benefits by refraining from pathogenic patterns of thought and emotion in the future. This technique is most effective for those who can use there own proficiency in meditation to complete the process by establishing three protective shields of light around the body.  The outer layer is formed from white light generated from the crown of the head, the next from red light emanated from the throat, and the innermost  from blue light radiated from the heart. These protective barriers consist of many images of Vudasi densely packed together. Her luminous effigies protect the body, speech, and mind of the meditator and stand guard against any negative energies or contagions that arise in the future.

Pacifier of all intense pain,
Destroyer of all sickness.
Mistress of all well-being,
You deserve universal honor.
As long as there is suffering,
do not abandon the world!

Sachamama means Mother Tree [or Mother Jungle]. She was a goddess in the shape of a snake with two heads. When she passed on to the heavenly world she transformed into K’uychi. Literally, spirit mother of the jungle.