Her dancing, leaping, and soaring poses proclaim that she is fully alive and joyously free. She displays Buddhahood in female form and revels in the ultimacy of her attainments. Her glowing red body is ablaze with the heat of yogic fire and circled with flames of wisdom. Tantra Mother (Vajrayogini) never parts from her brimming skull cup, ever slaking her thirst for primordial ecstasy, which is not ordinary pleasure but the innate bliss that pulses at the core of every being and is the birthright of all living creatures.

From her sovereign vantage point of ultimate truth, she recognizes all human concerns as mere bubbles of illusion, the eternal play of primordial bliss. Rather than fulfilling petitioners needs and desires, Tantric female Buddhas sever the bonds of attachment and dissolve conventional thought, removing all vestiges of duality and delusion. Dancing in the realm of ultimate freedom, they beckon their beholders to leap free of the confines of worldly illusion and soar into a dazzling realm of infinite possibilities.

In contrast to Mahayana Goddess iconography (sitting on thrones like royalty), Tantric Buddhas such as Tantra Mother have a more dynamic, passionate persona. Their faces exhibit intense concentration, and even ferocity. Their bodies are unclothed, and their hair is unbound in the fashion of female ascetics and yoginis. 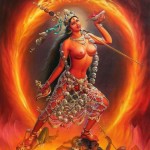 Vajrayogini is the original prototypical female Buddha of the tantric pantheon, her name meaning adamantine yogini, describes her as a female who has attained perfection through the practice of yoga, and thus become a divine, or adamantine yogini – compassionate, all knowing, and supremely blissful. Adamantine in the Buddhist context refers specifically to the indestructible state of enlightenment she has attained.

Among all dakinis, human and divine, Vajrayogini reigns supreme – Dakini Who’s Essence Is That Of All Buddhas.. The word dakini has a complex range of associations, describing Vajrayogini as one who flies, moves freely in space, dances in the sky, and sports blissfully in the limitless expanse of emptiness.

Vajrayogini is, first and foremost, an enlightened being. She has attained full awakening and manifests a divine body that expresses her spiritual realizations, providing a model on which others may meditate in order to achieve the same goal.

In keeping with her wholeness of being, Vajrayogini has every emotional modality at her command and can employ them at will. Most deities have one predominant facial expression or multiple faces displaying their repertoire of guises, but Vajrayogini exhibits a blend of moods “she is imbued with a mixture of wrath and passion, in the fullness of bliss, laughing and baring her fangs.” M. Shaw