As I drank the bitter tea my apprehension eased. I handed the cup back to the shaman, bowed with reverence, and returned to my seat. As I sat quietly awaiting the unknown effects of the tea, I felt a sense of surrender. I thought, whatever happens here tonight, I’ll get through it.

My first indication of entering the unique state of aya intoxication was a heaviness in the gut, a stirring motion like the uncoiling of a giant serpent. The vision appeared gradually. The snake was slowly winding it’s way up my torso from within, suddenly I caught a clear view and saw it as a multifaceted jewel serpent of intense beauty and color. The serpent then blasted into my minds eye, a giant force, larger than life, and whisked me deep into an inner world. This profound inner journey lasted for many hours.

Later, I would learn this serpent is featured in recurring myths shared by countless mainstream and indigenous cultures for millennia – including the ancient Egyptians, Aztecs, Aborigines of Australia, and Native American Hopi tribe. The amazonian ayahuascueros who lead these ceremonies claim the mother of ayahuasca is a snake. Hearing this peaked my interest. So I did a little research. Here is a brief outline of the relationship between ancient serpent mythology and the mysterious connection between DNA’s double helix – the source code of life.

Mythical serpents are often immense in size and scope. Some depictions show the serpent encircling the earth, as seen in the image of Ouroboros, an ancient bronze disc discovered in Africa. The Greeks had Typhon a monster serpent who touched the stars. The Hindus have Sesha, the thousand headed serpent of eternity who floats on the cosmic ocean carrying the twin creators Vishnu and Lakshmi.

The Shipibo people share the story of the great anaconda serpent Ronin who circles the entire earth, half submerged in water. Ronin is the mother and guardian of the rivers and the rainbow that links the water to the sun (heavens). In Norse mythology, The World serpent (Midgard) encircled the world in the oceans abyss biting its own tail. These images of the serpent forming a ring and having its tail in its mouth are considered to represent the totality of existence, infinity and the cyclic nature of the cosmos.

My personal favorite is the Gnostic description of the planetary mother as an Aeon named Sophia (gaia) emerging from the pleromic center as a serpentine telluric current of divine organic light (encoded plasma). In this telling, the ancient gnostic seers evoke a unique myth, an open-ended living myth where Gaia-Sophia’s story is, in fact, a fascinating origin story of our biosphere and her magical children of light, the Anthropos.

In delving deeper into these serpent myths, my research naturally led into the world of indigenous tribes and the seers / shamans who also take on the role of medicine men.

Historically, the word shaman was invented by early 20th century anthropologists. Originally from Tungus (Siberian) language a Saman is a person who beats a drum, enters into trance and cures people. These early Russian observers treated the saman as a curiosity, even describing them as mentally ill, neurotic, or schizophrenic.

By mid 20th century, these views quickly changed, with Claude Levi Strauss’ observations and conclusions. He claimed these shaman were actually psychotherapists who speak through action, whereas a typical therapist or psychoanalyst listens. According to Strauss, the shaman was a creator of order who cures the people in the tribe – they were seen as Masters of Chaos… Avoiders of Disorder. The mistake of the early western observers (all academics) of the indigenous shaman was obvious in hindsight. They were trying to conduct a rational study of a non-rational subject. The only way to comprehend the chaos of the shaman worldview would require stepping into it, and a few field researchers have done so with impressive discoveries to share: Michael Harner (The Jivaro), and Jeremy Namby (Cosmic Serpent) to name two.

According to historian and mythologist Mircea Eliade, this common theme of serpents in mythology witnessed by indigenous shamans appeared as a rope, a ladder, or stairway. Mircea would later call this theme the ‘axis mundi’ or axis of the world. Axis Mundi gives access to the underworld, or otherworld, often described as a passage used by the recently departed (and often witnessed in near death experiences).

In amazonian shamanism, by accessing the otherworld, some shaman believe they can master all the secrets of magic – through the spirit of the ladder. By drinking the tea of a specific liana vine (a component of the ayahuasca tea), often taking form as a double spiral, whom the ayahuasqueros call the spirit vine or the vine of the soul, they have learned to speak the language of nature. As healers, the shaman have impressive track records – proving again and again with empirical evidence – to be valuable resources to western medical science, yet they have never been given proper credit for their discoveries.

As Namby explains: “According to one Ayahuasquero, when he drinks his plant brew, the spirits present themselves and explain everything. They call these invisible beings the ‘maninkari’, who can be found in animals, plants, mountains, streams, lakes and certain crystals. These beings are the source of their knowledge. Maninkiri means ‘those who are hidden’. They can be seen when ingesting strong tobacco or ayahuasca. My investigation had led me to formulate a working hypothesis: In their visions shamans take their consciousness down to the molecular level and gain access to information related to DNA, which they call ‘animate essences’ or ‘spirits’. This is where they see double helix’s, twisted ladders, and chromosome shapes. This is how shamanic cultures have known for millennia that the vital principal is the same for all living beings and is shaped like two entwined serpents. DNA is the source of their astonishing botanical and medicinal knowledge, which can be obtained only in non-rational states of consciousness”.

At the heart of the nucleus within every living cell can be found a tapelike coil of DNA that carries the code of life. If you were to stretch out this DNA (Deoxyribonucleic acid), you would find a strand of about 2 yds long by 10 atoms wide – making this thread a billion times longer than its width. Yet this thread coils in on itself and packs this extreme length into a minute space within the cell. DNA can contain anything from a few rungs to many thousand, depending on the complexity of the function involved. In addition, this DNA is surrounded by salt water, literally in same concentrations found in sea water. Very much like the serpent Ronin encircling the earth.

The DNA chain is a single long chain made up of two intertwined ribbons – connected by the four protein bases that can only match up in specific pairs A with T and C with G. Any other pairing is impossible due to the atomic structure designed to fit like a key and lock. One of the two ribbons is a duplicate ‘text’ of the original, read by specialized enzymes that transcribe the code. This four letter text code reaches out to surrounding protoplasm and chooses from 20 different amino acids to form the variety of genetic code; as instructions, words, books and even libraries that guide the cellular development of each organism, whether plant, insect, animal or mammal. Interestingly, all phonetic alphabets contain about 20 letters on average – a key number for the expression of written language as we know it.

The second ribbon allows for the duplication of the original and can actually unzip and replicate itself into an identical double helix with the help of more specialized enzymes. This is how cells divide (mitosis), through the code of instruction that is Deoxyribonucleic acid – deo is Latin for God and DNA certainly exerts a mystical godlike power. In essence DNA is the source of life molecule carrying the information that instructs and guides all living organisms and species. Without DNA, there would be no intelligent organic life. What is most extraordinary is this DNA is uniquely our own and identical in atomic arrangement from head to toe, and one could even conclude the origin source of knowledge. 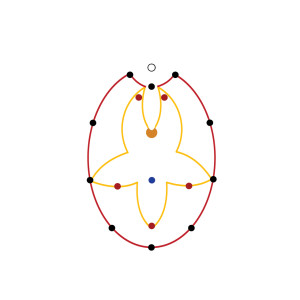