Bodhima (Visvamata) and Kalachakra adopt a striking pose, locked in passionate embrace, lovingly gazing at each other. The intimacy they share and the dazzling display of arms create a dynamic tour de force.

Kalachakra is time and everything is under the influence of time, Kalachakra knows all. Whereas Kalachakri or Kalichakra (Visvamata), his spiritual consort and complement, is aware of everything that is timeless, untimebound or out of the realm of time. They are temporality and atemporality conjoined. Similarly, the wheel is without beginning or end.

Kalachakra is the Wheel of Time. Bodhima is the Universal Mother. And fused together they symbolize enlightened bodymind. Kalachakra originates from the ancient Vedic tradition which existed long before Buddhism appeared. The Kalachakra has been adopted by many different traditions, for example the Hindu, Vedas, Upanishads and Purana traditions, as well as Tibetan Buddhism and Jainism.

In the ancient Vedic time system, Kala (Time) is not regarded as linear or a single directional movement, like an arrow speeding from past to future. Likewise, the Hindus spoke of rhythm or universal order which is manifested as time. Time rhythms range from the fast ticking of the atom to the expansion of the entire cosmos. Time unfolds within the geological process of the Earth, the change of the season, the life cycle of a fly etc. 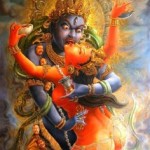 Kala is directly linked to Siva. Siva is called Maha Kala “The Great Time.” His consort Kali Ma personifies the dynamic current that is shakti, action, liberated from the rhythms of Time. Kali can appear as a vortice with many arms spiraling from her side, her arms can reach into all dimensions simultaneously. Thus she is everywhere, unbound by Kala.

In sanskrit, the root visva means; Universe, and mata is Mother. Bodhima exemplifies the vedic term Rta, in Hindu; Rita – “that which is properly joined; order, rule; truth.” Rita is the principle of natural order which regulates and coordinates the operation of the universe and everything within it. In the hymns of the Vedas, Ṛta is described as that which is ultimately responsible for the proper functioning of the natural, moral and social orders. Conceptually, it is closely allied to the injunctions and ordinances thought to uphold it, collectively referred to as Dharma, and the action of the individual in relation to those ordinances, referred to as Karma – two terms which eventually eclipsed Ṛta in importance as signifying natural, religious and moral order in later Hinduism.

“From the outset, Visvamata assured me that she was always on call and would discourse at length on anything relevant to her domain. Her tone was soothing, relaxed and relaxing. She inspired confidence.Her transmission is somewhat discursive. It unfolds over time in a special manner because her style of instruction requires reflection and assimilation. She patiently explained to me that she communicates like a tour guide who walks you slowly through a site or a museum, commenting in detail on what comes up along the way.

Her transmission is not cogent or brutally incisive, as I had become accustomed to expect with the other devatas. Visvamata needs to take time and show us what she teaches in the unfolding of events and relationships, concurrently as those events transpire and those relationships shift right before our eyes.

Visvamata instructed me that concurrence  is the signature of her unique style of teaching, unlike the brutal samurai-blade delivery of the other dakinis.

I take it that such a style characterizes Visvamata as a “Female Buddha” who exercises extraordinary patience with those she instructs, and accordingly, adapts her teachings to their limitations. In concurrence—namely, her unique talent of reflecting insights against the shifting pattern of events and relationships—she is “variegated,” skilled in versatility. I am tempted to call her the Dakini of Fractal Modes. Fractality is similarity of form on different scales. The modalities of Visvamata’s Buddha Wisdom come to mind easily and accessibly because she adapts her instruction fluidically to the scale of our experience, large and small. She will teach you a universal truth respective to your experience in specific terms, in the scale of your understanding at any particular moment, relative to any transient situation. How sophisticated is that.” JLL

With reference to Buddhist and Hindu Tantric tradition, the divinatory power of the Aeon Sophia that radiates the recognition of the Maitreya into the ordinary mind is Visvamata, “The Variegated Mother,” fondly referenced as Bodhi-Ma. She is mother of the Bodhisattvas. As Iachhos, the child of the Mysteries, is the son of the Pleromic Sophia, so the Maitreya is the son of Bodhi-Ma — the living offspring of a divine feminine archetype. The Maitreya is what the Aeonic Mother imagines “It” to be. Sophia herself bears forth this fortunate child from the matrix of her dreaming attention, divine imagination.

Bodhi-Ma confers the generic sense of humanity to the human animal isolated in ego, single-self identity. She nurtures the consciousness of the species-self, as it may be called. The recognition of the Maitreya anchors this sense of humanity in the human mind as a non-abiding, transpersonal insight that passes from look to look as human animals encounter each other, strangers or not. The radiant gaze of Bodhi-Ma holds this insight steady in the broke-open heart of innocence.  JLL